Do PPP contracts fall under the PHL Competition Act? 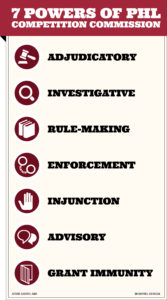 CAN a public-private partnership (PPP) arrangement be considered anticompetitive and punishable under the Philippine Competition Act (PCA)? Are PPP contracts under the jurisdiction of the Philippine Competition Commission (PCC)? Can a winner of a PPP award be in abuse of a dominant position prohibited under the PCA? Does the PCA repeal or amend the build-operate-and-transfer (BOT) law? Must there be prior notice to the PCC before the government awards a PPP contract to a private-sector proponent (PSP)?

However, if competitors or bidders agree to restrict the price, suppress bids, rotate bids or allocate the market, this may be covered under this prohibited act.

Abuse of dominant position: A dominant position refers to a position of economic strength that an entity or entities, private or even government, hold which makes it capable of controlling the relevant market independently of the competitors, customers, suppliers or consumers.

Being in a dominant position is not by itself illegal. The abuse by reason of such position is. There is abuse when such entity substantially prevents, restricts or lessens competition through means listed under the PCA.

There could be no abuse if a PSP wins against other bidders for a natural or legal monopoly, thereby, gaining a dominant position. In which case, there is no abuse resulting from a dominant position because the “dominance” resulted from a competitive process. Prior to the award, none of the PSPs or bidders could drive out competitors or impose barriers to entry since they are all on equal footing.

Anticompetitive mergers or acquisitions: Some may argue that when a PPP arrangement involves a merger or joining of government and the PSP, or when the PSP acquires and obtains control over a government asset, this substantially prevents, restricts or lessens competition.

In which case, if the transaction value is more than P1 billion, there must be prior notification to the PCC, otherwise, the PPP contract is void and the parties, including the government agency, can be meted a fine.

I believe the framers of the PCA did not intend this. If this were the intent, then Congress should have included the build-operate-transfer law in the repealing clause of the PCA. Further, there could be no merger or acquisition, which may be considered anticompetitive if the entity/PSP wins in a competitive and fair process conducted by government itself.

Dissecting and understanding PPP contracts No. 4: MAGA - Material Adverse Government Action One of…