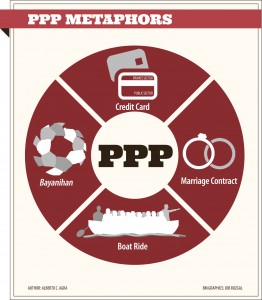 Simplifying a complex arrangement like a public-private partnership (PPP) is not a daunting task as it may seem. Using metaphors and comparing PPPs with common or day-to-day activities will definitely help in informing the public about this development strategy. Popularizing PPP de-monopolizes knowledge and facilitates the creation of a broad PPP learning ecology.

In the case of PPPs, where the government subsidizes the project and pays in “installments” or tranches, the government “borrows” from the private-sector participant (PSP). The PSP invests and, as a consequence, it charges “interest” or is entitled to obtain a reasonable rate of return. The PSP “lends” to government, since the latter does not have enough resources. Effectively, however, we are the ones paying for what the government “borrows,” since it is our money that is being used to pay the PSP.

(2) PPP is like a “marriage contract.” A marriage contract is an agreement that establishes rights and obligations between two eligible and consenting persons. In a PPP, the parties must be qualified and must voluntarily agree to be bound by the terms of the agreement. The PPP contract outlines the contributions and responsibilities of each party. The parties work together for a common cause. To sustain the relationship, the parties to a PPP, like the spouses to a marriage, must trust each other, share information
and dialogue.

However, the true objective of a PPP contract is not the “spouses” but the general public the parties must serve. Further, unlike a marriage contract, which does not have a fixed term, a PPP
contract is time-bound.

(3) PPP is a “boat ride.”  Imagine a boat with passengers and two crew members, where one steers and the other one rows. This is often used to illustrate a PPP arrangement. In this boat ride, the government steers, as it sets policies, oversees the implementation of the project, regulates and
sets the tariff.

The PSP, in turn, is the rower who undertakes the day-to-day responsibilities for the upkeep and operations of the boat. Both are responsible for the passengers, so that they will reach their destination safely and comfortably.

(4) PPP is “bayanihan.” Bayanihan is a Tagalog term which means “cooperative undertaking” and “collective participation.” Bayanihan describes PPPs in two respects, i.e., as bayan-ihan and bayani-han. Both depict a story, a journey and a purpose, and demonstrate participatory leadership.

The core of a PPP is the country, people or bayan. The house or shanty  is the “load” all stakeholders, the mga bayani, must carry from one point to another, indicating common purpose and resolve for a better quality of life. Not one person or party can effect change and plug the infrastructure deficits. Transformation necessitates abayanihan approach
to development.

He is a bayani who dedicated his life for the bayan.

Popularizing PPPs: PPP Menu by Casa Agra and PPP 101 AVP Should a handful of…

What PPP can learn from Tough Mudder