Battling the drug menace via PPPs 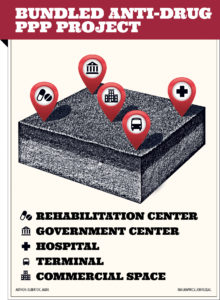 CAN there be a link between combatting the drug crisis and pursuing development through public-private partnerships (PPPs)? What antidrug programs and projects can be undertaken through PPPs? Who will be the payors of these projects? What PPP modalities can be used?

• Defining the context. In order to establish a link, the drug menace must be viewed as the problem and the context, while PPP should be advanced as a, not the, solution. PPPs should not be viewed as the goal. PPP is a vehicle and is just one of several change strategies.

• Expanding PPP’s limited con­cept. In order for PPP to be a viable strategy to respond to this problem, the concept of PPP must be ex­panded. Anti-illegal drugs-related PPPs should extend beyond infra­structure, should not be confined to private-sector financing, should be open to civil-society participa­tion, and should involve all levels of the government bureaucracy. This is a basic recognition that government alone cannot ad­dress the crisis on a long-term and sustained basis.

• Identifying anti-illegal drugs-related PPP Projects. Rehabilita­tion centers would be the top of mind PPP project. Drug surren­derers and convicts could no lon­ger be accommodated in existing facilities. Another one would be information technology-related projects, like a database tied up with blotter systems, clearances, warrants and court decisions. Government health care and hos­pitals may be further equipped to handle drug-related cases. Drug education and prevention cam­paigns may be institutionalized. Integrated CCTV systems, while not just for illegal-drug monitor­ing, can be part of the initiatives of Smart Cities.

• Making these projects at­tractive through bundling. If stand-alone, these projects may not be feasible. For example, there might be no takers if the infrastructure is just for a reha­bilitation center. For the private sector, unless it is a donation, there must be a return. For a re­habilitation center to be attrac­tive, this must be bundled with revenue-generating activities. A government complex that would house the rehabilitation center, as well as the local government capitol, inter-modal terminal, public market , hospital and commercial establishment s may present a better-than-good option.

• Recovering investments from payors. The question now arises— from whom will the private propo­nent recover its investment? For PPPs, there are only two payors— the end-users or government using taxpayers’ money. It may be diffi­cult, even unfair, to charge all drug surrenderers. Government may not have the adequate resources for this. This is the reason bundling is a doable option.

• Outlining the PPP modalities. For the listed projects, government agencies may enter into any of the 24 modalities. The nine build-op­erate-transfer (BOT) law variants, joint ventures, concessions, man­agement and service contracts using or not using public funds, donations, among others, may be adopted. The private sector and/or government can be the funder, builder, designer and/or operator.

• Picking the implementing agency. The Department of the Interior and Local Government, the Philippine National Police and the Philippine Drug Enforcement Agency may, singly or collectively, pursue a BOT rehabilitation proj­ect. The Bases Conversion Devel­opment Authority, Clark Develop­ment Corp. and Subic Bay Metro­politan Authority may enter into joint ventures for the all-in-one complex. Local government units can also participate.

Enough talk. Let us do it.

PRA highlights PPPs and G2G for Legacy Islands on Water