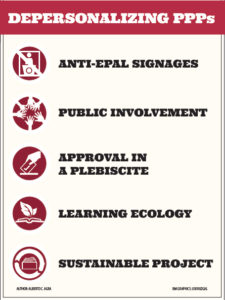 HAVE you seen government and Public-Private Partnership (PPP) projects that bear the name of the highest government official who signed the contract? What is your impression or reaction to this? If you were the successor chief executive, would you be tempted to discontinue this project or drop the name of the predecessor?

Every time a government or PPP project bears the picture, name, emblem, initials, logo, color or insignia of a politician or elective official, a disturbing message is communicated to the public and political opponents. Intentionally or unintentionally, consciously or unconsciously, the President, legislator, governor, mayor, punong barangay, head of agency is telling us that he or she “owns” the project, and that without him or her, there would not be any such project.

This public-relation scheme, while beneficial for the incumbent, may not augur well for the PPP project, which may last up to 50 years. In 50 years, there could be eight presidents, 16 governors or mayors and 50 heads of state corporations. If the successor is vindictive, has no respect for the sanctity of contracts, feels that s/he has a monopoly over righteousness and noble intentions, then long-term PPP contracts, policies and rules, may be susceptible to unilateral amendments, even rescissions. This “successor, political or regulatory risk” becomes more real if the projects are “personalized.”

One way, therefore, of “future-proofing” PPP arrangements would be to “depersonalize” PPP projects. Government projects must be divested of human characteristics or individuality. To make PPP projects sustainable—assuming, of course, that the project serves the people and promotes better quality of life—the project must be detached from the person of the public official.

The only gratification of such official is knowing that he or she is serving the public, not himself. or herself. Public officials are public servants who serve the public, and not the other way around, where patronage is the core. A PPP, after all, is PPP for the people, not PPP for the person. Any badge of ownership or self must be removed.

This columnist hopes that, if and when the Anti-Signage of Public Works, or Anti-Epalbill, becomes a law, it will contain a provision that will include PPPs within the scope of the prohibition on public officials from affixing their names or photos on signage announcing a planned, ongoing or finished public-works project.

However, future-proofing and sustainability strategies should go beyond signages.

The people, the beneficiaries of any PPP project, must be part of the end-to-end process. Another way of guarding against successor risk is subjecting the PPP contract to a plebiscite where registered voters approve a PPP project or set of PPP arrangements.

The people must, likewise, be empowered through learning and being part of the PPP learning ecology. The project itself must be sustainable and  environmentally feasible.

So, to our public officials, please use the name of the agency or the people in PPP projects. They are ours.

Battling the drug menace via PPPs