Framing the role of Tidcorp in desocializing losses in PPPs 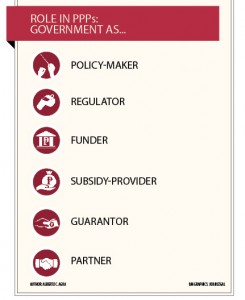 How can risks attending a public-private partnership (PPP) arrangement be mitigated? How can the general public be shielded from the harmful effects of a failed PPP project? How can the Trade and Investment Development Corp. of the Philippines (Tidcorp) help de-socialize losses and risks?

In an article, titled “PPP and Gender Justice in the Context of the Third UN Conference of Financing for Development,” published by the Development Alternatives with Women for a New Era, failures in PPPs can be attributed to the “privatization of benefits and socialization of losses.” In this “double whammy,” we, as end-users and taxpayers, are not gainers and, worse, are at the losing end.

PPPs may tend to lose sight of the “true north” of PPPs, which is the public good and better quality of life of the people. When ordinary people and the society bear the losses, and do not share in the benefits, and where the private-sector proponent does not absorb any loss and passes all risks to government, and ultimately to us, PPP becomes purely pro-profit and antipeople. Benefits are privatized, and only a handful gains.

When government extends a subsidy that is undisclosed, unconscionable and unaccounted for, the people will directly or eventually bear the burden. This happens in “lemon socialism,” where government abdicates its role as regulator, relinquishes its duty to protect human rights and subsidizes unfeasible projects.

Regardless of the PPP project and modality, government should continue to “steer”, while allowing the private sector to “row.” Government agencies can or should help prevent the occurrence of the double whammy.

Tidcorp, also known as the Philippine Export-Import Credit Agency (Philexim), can be one such government agency that can facilitate or enhance the “de-socialization” of risks and losses. A liberal reading of the charter of Tidcorp reveals that it can go beyond exports. Tidcorp can act as guarantor, funder and/or risk mitigator of PPP projects, thereby protecting the public from the harm we want to avoid.

To obviate a “moral hazard risk” situation where government and Tidcorp will assume more or less risks and functions than it should or where the private-sector proponent will be incentivized to engage in excessive risk-taking due to guarantees that may be extended by Tidcorp safeguards must be installed. First, the true north must be at the front and at the back of the minds of government officials, and this orientation should be shared by the private sector. Second, guarantee caps and ceilings must
be imposed.

Third, external controls and audit mechanisms must be in place. Fourth, the people, through civil-society organizations, must be part of the PPP cycle from prioritization, selection and implementation. Fifth, any guarantee must be disclosed and accounted for. Last, the private sector can participate in the guarantee by paying a premium or posting a collateral.

The task now is to reframe PPPs, recalibrate government’s mandate, redefine Tidcorp’s participation, and reassess the role of ordinary people. Then, we all move forward with a purpose.

With 7 options, water is the next big thing in PPPs

With 7 options, water is the next big thing in PPPs WHY is everyone into water?…

Do we suffer from ‘bureauphobia’?

Do we suffer from ‘bureauphobia’?   In order for public-private partnership (PPP) arrangements to happen,…