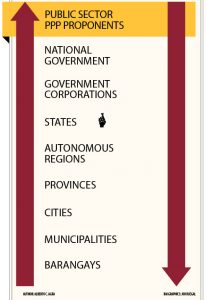 Is there a difference in terms of public-private partnership (PPP) under a unitary or federal form of government? If the country federates, as being advocated by the incoming president, will this support or block PPPs at the provincial, city, municipal or barangay level? Will another layer of bureaucracy be facilitative of development through PPPs?

For those who believe in local governance and in the capacities of local leaders and communities, like this columnist, federalism is the logical next step of the maturation process. Federalism is at the end of the spectrum where states will be established.

Under the current unitary setup, local government units (LGUs) are mere subdivisions of one unit, which is the republic. LGUs do not have a claim against the state, and are under the supervision of the Executive branch and control of Congress. They do not enjoy sovereignty, are dependent, although in varying degrees, on national revenues, beholden to national government approvals and clearances, and susceptible to intervention
from “Imperial Manila.”

When our regions become states, there will be parity of some rights and sharing of sovereign powers between the central government and the states. State powers and jurisdiction must be defined and eventually approved by the people in a plebiscite.

PPP in Federal Philippines, as this columnist envisions it, requires or recognizes:

Passage of a PPP state policy and law. Absent any restriction in any national law, states must be allowed to enact their own laws on PPPs. States, like LGUs today, must voluntarily embrace, rather than be impelled to adopt, PPP as their own strategy.

States as another implementing agency. Like national government agencies, state corporations and LGUs, states, having their own juridical personalities, can partner with the private sector for PPP projects. The State can implement, coventure into, fund, guarantee and/or subsidize PPP projects.

State- or region-wide projects. In terms of scale and breadth, state-level PPPs shall go beyond the territories and jurisdictions of provinces and highly urbanized cities. These projects will be bigger in scope, will have greater impact, and will benefit more people. This will regionalize development.

State-level planning. PPP is a means to achieve better quality of life anchored on a development plan that is statewide. The State Government must be able to pursue on its own statewide projects and harmonize, integrate and coordinate LGU plans.

State-based competition. Each state must be able to identify, optimize and capitalize on its competitive advantages. PPP projects should facilitate and enhance the unique advantages of every region.

This columnist looks forward to PPPs in Federal Philippines.

Dissecting PPP contracts #8: ADR During the life of a public-private partnership (PPP) arrangement, which…

Traversing PPPs is like a ‘Spartan Race’. Aroo! HOW similar is the process involved in public-private…

PPP Conversations No. 5 with Laguna Lake Development Authority On May 24 the Philippine Reclamation…