No money-out option for govt 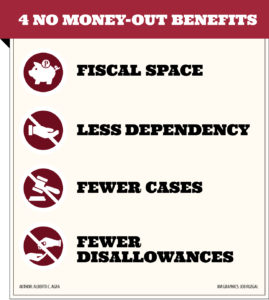 ARE implementing agencies (IAs) required to shell out money for public private partnership (PPP) arrangements? What is the appropriate PPP modality for a no cash-out option on the part of the government? Why is this option popular for IAs, particularly local government units (LGUs)? Aside from cash, what can an IA contribute so that it will have a “skin” in the project?

The government has the option to or not to contribute cash; extend subsidy; provide viability gap funding; guarantee, or give equity to a PPP arrangement. Depending on the modality, priority, governing law or viability of the project, the choice partakes of a legal, political, socioeconomic, even a leadership question and challenge.

Under the build-operate-transfer law, the government may provide for a direct government guarantee, subsidy or equity for solicited projects. Depending on the modality, lease payments and grantor payments from the government may be part of its contractual obligations. For the School Infrastructure Project and South Integrated Transport System Project, the government will make such payments to the private-sector proponents (PSPs). The annual budget to be approved by Congress must provide for an appropriation for these payments.

For the Naia expressway, LRT Line 1 Extension and Cavite-Laguna Expressway projects, the awards were given to the PSP that offered the lowest cash support from the government. For the 12 water supply and distribution joint-venture projects entered into by water districts, there is no money out from these government-owned and -controlled corporations. The water districts, for granting concessions, will be entitled to revenues.

This no-money-out, money-in approach is more popular with LGUs. In consideration of the non-cash contribution of the government, such as the grant of concession or franchise, authority to use public property or the prerogative to reclaim land, the government, in turn, under the PPP contract, shall be entitled to concession fees, lease rentals, share in the revenues, dividends and land.

For the terminal projects in Batangas, Legazpi and Tarlac Cities; and the ferry terminal in Iloilo City; and for the Davao City, Manila, Parañaque, Pasay, Laguna and Cordova and Consolacion municipalities; with Cebu province reclamation projects, these LGUs, under a joint-venture arrangement, shall enjoy a steady stream of revenues and land, respectively.

Additional revenues can lead to less dependency on national government support, such as the internal revenue allotment for LGUs. More resources will be made available for social services, which may not be viable under a PPP scheme. More land translates to land for a government center, hospitals and evacuation centers, among other facilities.

No public money-out also yields other advantages. Fiscal space will be created for the IA; since it can use its resources for some other purpose. Chances of lawsuits from taxpayers may be reduced. There could be fewer disallowances from the Commission on Audit.

Not to be accused that the government is only into PPPs for the money, money is not the be-all and end-all of PPPs. Public good is. For the government, public advantage and better quality of life are the real reasons for PPPs. PPPs are for us.