The future of PPPs is written on the wall 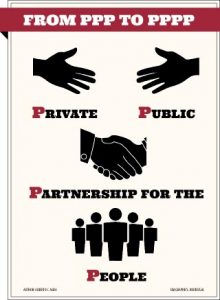 IS public-private partnership (PPP) the only solution to the infrastructure deficit? Is PPP truly a priority program of the incoming Duterte administration? What is its relevance and importance in achieving the 10-point socioeconomic agenda? Is there a future for the PPPCenter? What could be the role of the PPP Center moving forward?

From all indications, PPP will be a priority program and a key change strategy of the incoming administration. Recent events will show that President-elect Rodrigo R. Duterte is not just paying lip service.

In the recently concluded two-day business summit in Davao City, the 10-point socioeconomic agenda of the incoming administration was presented and discussed. The fourth agenda includes PPPs. The President has committed to “accelerate annual infrastructure spending to account for 5 percent of the gross domestic product, with PPP playing a key role.” At the sidelines of the event, incumbent City Mayor Duterte signed a 50-year joint-venture agreement with the private sector, selected through the unsolicited proposal route, for the Davao Coastline and Port Development Project worth close to
P39 billion.

Here are five suggested actions points on the fourth agenda:

1.  From PPP to PPPP. The current tag of this program only highlights the parties (i.e., public and private) and the relationship between them (i.e., partnership). The purpose or “true north” of the arrangement is, however, deemphasized. It must be underscored that any PPP should be for better, not just good, quality of life. PPP may, therefore, be rebranded as PPPP or PPP for the People.

2.  PPP is a part of a whole. PPP cannot be the end in itself. It is should not even be viewed as a panacea or the only solution to the infrastructure and public-services deficit. As discussed in the two-day summit, “PPPs are not a quick fix for financing and delivery, but can be an important part of infrastructure delivery.” It must be pursued as a program and a change strategy.

3.  Expanding the PPP definition and reach. To be an effective change strategy, adaptive innovation must be encouraged. Alternative PPP modalities should be advanced. Confining PPP to the modalities under the build-operate-transfer law stymies innovation. More options is better.

To facilitate inclusive growth in the whole country, PPPs should be implemented outside Metro Manila and nearby areas. Local governments all over must be empowered and encouraged to adopt their own PPP frameworks.

4.  Strengthening and decentralizing the PPP Center. The need for a central technical and advisory agency on PPPs under the National Economic and Development Authority, or possibly under the Office of the President to underline the priority, cannot be understated.

The PPP Center should continue to be the repository of expertise, data and learning. However, the expertise should not be monopolized under one roof. Horizontal and vertical decentralization must be promoted. Satellite PPP Centers in Northern Luzon, the Visayas and Mindanao may be established. Implementing agencies at all levels—i.e., national, state corporations and local governments—should have their own PPP units. The PPP Center can, thus, serve as institutional mentor and coordinating agency of these units.

5. Future-proofing PPPs. Successor risk or changes in policies and interpretations and unilateral amendments or rescission of PPP contracts entered into by previous administrations should be avoided. Stability, trust and participation by stakeholders motivated by the fourth “P” are critical in sustaining PPP. Ethical standards must be in place.

We are looking forward to a brighter and comfortable future. We hope that PPP, among other change strategies, can bring
us there.

Dissecting PPP contracts #3: Anticorruption warranty One of the longest clauses in a public-private partnership…

PPP calls for innovation: Are we ready?

PPP calls for innovation: Are we ready? Does a public-private partnership (PPP) arrangement require innovation?…