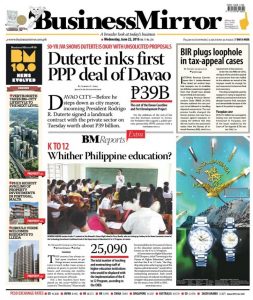 Davao City—Before he steps down as city mayor, incoming President Rodrigo R. Duterte signed a landmark contract with the private sector on Tuesday worth about P39 billion.

On the sidelines of the end of the two-day business summit in Davao, the President-elect signed a public-private partnership (PPP) contract with a proponent on port development. This is one of his last acts as mayor of Davao City.

As local chief executive, Duterte—joined by representatives of the City Council and the members of the Davao City PPP Board (DCPPPB)—signed a 50-year joint-venture agreement (JVA) with Mega Harbour Port And Development Inc. This is the first PPP contract entered into by the Davao City under its 2015 amended PPP ordinance.

The Davao Coastline and Port Development Project aims to spur the economic growth of the city. Davao envisions to be the premier socioeconomic and tourism center in Mindanao, as well as in the East Asia-Pacific region. The project will support the city’s plan of becoming the gateway of commerce and trade in the Davao Gulf area, even for the whole of Mindanao region.

The project, which will be situated on a 214.61-hectare land to be reclaimed by Davao City as project owner and the proponent as project developer, shall accommodate a modern and state-of-the-art commercial port for containerized and noncontainerized shipments, with cargo-handling equipment and information-technology infrastructure. An industrial park, a commercial complex, and residential lots and houses will also be constructed thereon.

According to the project study submitted by the proponent, the unprecedented demand due to increased economic activity in the region requires better infrastructure and logistics support for its industries and services sectors, which the region’s main public seaport and secondary seaports cannot fully accommodate, especially bigger cargo-movement requirements.

Under the JVA, the reclamation and vertical development will be undertaken by the proponent at no cost to the city. The proponent shall also provide the relocation site for the affected residents at the commencement of the project. The informal settlers shall be tapped as source of skilled and unskilled laborers during the construction phase of the project.

The project, to be jointly undertaken by the city and the private sector, shall contribute to the government’s efforts to reduce the high underemployment rate by helping attract multinational business-process outsourcing companies and call-center operators to set up shop in Davao City through the provision of an industrial park.

Aside from these benefits, the city government is expected to increase its income, in anticipation of the new establishments and business enterprises to be catered in the industrial park and commercial areas. The city’s increased income will consequently translate into increased tax revenues for the city government. With more revenues, the city will be less dependent on the internal revenue allotment from national government and will have more funds for basic and social services.

This first PPP of the city truly advances the true north of PPPs —to promote the general welfare and provide for better quality of life of the people. The City Council and the multisectoral DCPPPB, in approving the terms of the JVA and recommending approval to the mayor, respectively, made sure this mandate and the pro-people and pro-change stance of the city will be respected and advanced.

After the signing of the JVA, the city government will forward the documents to the Philippine Reclamation Authority for its study and recommendation to the board of the National Economic and Development Authority for its approval.

Davao City joins 70 other local governments in pursuing PPPs using their own PPP ordinances. The provinces of Bataan and Nueva Ecija, and Calamba entered into JVs for their government center and capitol redevelopment, the province of Quezon on bulk water, hydropower and wind power, and the cities of Pasay, Parañaque and Manila, and Cordova Municipality on reclamation. Manila and Valenzuela cities entered into JVs for their markets, Iloilo City and Batangas City on terminals, and Cebu City and Cordova Municipality together for the third bridge in Cebu.

The message of the incoming President is clear. He believes in the importance and criticality of PPPs to plug infrastructure deficits. Dramatic change can be brought about through PPPs. He has demonstrated that local governments can be trusted and that they possess the competencies to pursue iconic and high-impact PPP projects. By signing the JVA, where the proponent was chosen through the unsolicited proposal route, he subscribes to this alternative route of selecting the proponent.

The signing of this JVA could not have come at a more auspicious time. It signals the “warm-up” to the realization of the 10-point socioeconomic agenda, the fourth agenda being to “accelerate annual infrastructure spending to account for 5 percent of GDP, with PPP playing a key role.” This showcases “Sulong Pilipinas: Hakbang Tungo sa Kaunlaran.” This is definitely a good first step not just for Davao, but also for the whole country.

PPP Menu No. 3: Public and/or private resources … Choice of the cuisine

PPP Conversations No. 11 with PPA GM Jay Santiago   Public-Private partnership (PPP) is not…

A little of administrative law in PPP law

Legislation in the world of PPPs

Legislation in the world of PPPs Supremacy of the fundamental law. Yes, PPP is a…