The PHL PPP Center: What it is, what it is not and what it ought to be 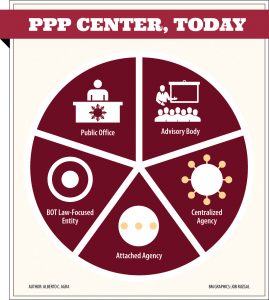 WHAT is the anatomy of the Public-Private Partnership (PPP) Center of the Philippines? What is its mandate? How critical is its role in development? What types of PPP modalities is it advancing? Is it an implementing agency? Who has control over its actions?

(1) PPP Center is a public, not a private, office. Like the Department of Finance and the National Economic and Development Authority (Neda), the PPP Center is a public office. It performs a sovereign or public function. Per Executive Order (EO) 8, Series of 2010, the PPP Center shall assist government agencies in pursuing PPP programs and infrastructure and development projects. Its functions are specialized and highly technical. As a public office, although only created by executive fiat, it serves and is accountable to the public.

(2) PPP Center is an advisory body, not an implementing agency.

Like its precursor, the build-operate – and- t rans fer (BOT) Center, the PPP Center is not an implementing agency. It does not select the private proponent, award PPP contracts and implement PPP projects. It advises, renders assistance, recommends and monitors. In addition, it handles public funds by managing the Project Development and Monitoring Facility.

In countries like Brunei Darussalam, Singapore and Vietnam, based on the 2014 paper PPP Units and Programs in Asia and the Pacific published by the UN ESCAP, PPP monitoring and implementation are integrated in departments or ministries. Here, we have a centralized PPP unit. There is no horizontally decentralization at the national level. However, at the local level, local government units (LGUs) are free to form their own PPP units based on their PPP ordinances.

(4) PPP Center is an attached, not an independent, agency.

Under EO 8, the PPP Center is under the Neda. Formerly, it was attached to the Department attached agency, the Neda has no control and supervision over the PPP Center. Attachment, as defined under administrative law, does not vest upon the Neda the power to substitute or reverse policies and decisions of, to administer the day-to-day operations of, and to dictate upon the PPP Center.

(5) PPP Center’s mandate is broad, but its definition of PPP is limited.

Under EO 8, the PPP Center shall cover all PPP projects, including variants under the BOT Law, joint ventures and other modalities. But in actuality, it only assisted in BOT law projects. The PPP Center’s definition of PPP is confined to the BOT law and its web site only mentions the 12 awarded projects under said law. Joint-venture (JVs) projects are not part of its database. Public perception is, the PPP Center is focused on BOT law variants, the Neda on JV projects by state corporations and LGUs, because of the absence of any statutory restriction, are relatively free to pursue non-BOT law arrangements.

If this is the PPP Center today, what could or should it ought to be?

Dissecting PPP contracts #9: The party clause and assignment of rights

Dissecting PPP contracts #9: The party clause and assignment of rights Who pays attention to…

A PPP can be a PowerPoint presentation, etc.

A PPP can be a PowerPoint presentation, etc. AS we begin this New Year, we…