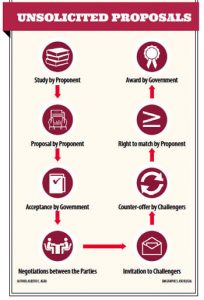 DO Philippine laws and regulations allow unsolicited proposals (UPs) in public-private partnerships (PPPs)? What are the advantages of UPs? Are there competition, accountability and transparency in UPs? What are the basic differences between solicited and UP procedures?

To distinguish, solicited or open-bidding procedures originate from the government, while in UPs, the project studies are prepared by the private-sector proponent (PSP). Once a UP is accepted, the PSP becomes an original proponent (OP) and no other proposal for the same project will be entertained by the government.

In open bidding, all bids are measured against the parameter set by the implementing agency (IA). In a UP, the proposal of the challengers must be better than the negotiated terms between the OP and IA. Depending on the modality, the OP has the right to match or the opportunity to outbid superior offers. If there is no challenger, the project is awarded to the OP. A premium is given the OP for taking initiative and spending for the preparation of the study with no assurance of getting the PPP contract.

Early during the term of the current administration, unsolicited proposals for national projects were frowned upon. As proof, all the 12 awarded projects were procuredthrough the solicited route. However, as an exception, although at the tail end of the expiring term of the incumbent President, the Department of Public Works and Highways is entertaining a UP for the road connecting North Luzon and South Luzon expressways. In contrast, UPs are popular for local government units (LGUs) and water districts.

UPs, while permitted under existing laws and regulations, are perceived to be anticompetition. This perception, arguably unwarranted, stems from the alleged undue advantage given to the OP, material deviations made postaward and inconsistencies in the periods where challengers are required to make counteroffers.

Under the build-operate-transfer law, the joint-venture guidelines for state corporations and LGU PPP ordinances, UPs are expressly allowed. The Supreme Court has upheld the legality of this procedure and has declared that competition, accountability and transparency exist in UPs. Straight negotiations, absence of notice and publication, material deviations that favor one PSP and absence of real opportunity to challenge are barred.

The question now is the orientation of our President-elect toward UPs—will he take on the same cautious and selective stance of the current administration or will he aggressively promote UPs. If he does the latter, his administration will surely award more than 12 PPP projects at the national level.

Contrary to what naysayers say, we might see a new airport, a subway system, monorail projects, waste-to-energy projects, among other big-ticket projects, sooner than we think if UPs are not stymied.

There is nothing to dread with UPs. There are enough safeguards in law and regulations. Even biddings are not without issues. The challenge lies in governance and following the rule of law in PPPs.

Availing of availability payments How can a project undertaken through a public-private partnership (PPP) arrangement,…

PPP is "Bayanihan" Is relevant to public-private partnerships (PPPs)? Are the objectives of bayanihan and…

Manila, City With Most Number Of Awarded PPP Projects

Manila, City With Most Number Of Awarded PPP Projects Which local government unit (LGU) has…