With 7 options, water is the next big thing in PPPs 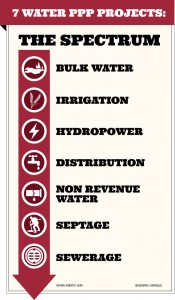 WHY is everyone into water? What government agencies can pursue public-private partnerships (PPPs) in water?  Who are the end-users and payors of water-related PPP projects? Why choose PPP instead of procurement of water projects? What makes water attractive to investors?

Yes, water is the next big thing. In fact, water is already the “flavor” of government PPP projects, at all levels. To date, close to 20 water-related PPP projects have been awarded by government agencies, water districts and local government units.

Responding to the needs of the communities is the plain reason why government undertakes PPP projects on water. PPPs are meant to address infrastructure and deficits. We need water. Water is a basic human right, which all stakeholders must provide. Build- or rehabilitate-operate-and-transfer schemes, joint ventures, concessions, management and service contracts, leases and divestments are the available modalities.

Water PPPs come in various forms. There are seven options in the water PPP spectrum: (1) Bulk water supply taps this resource from a source, and funnels the water to a distribution system. The recently-awarded project of the Metropolitan Waterworks and Sewerage System (MWSS) shall draw water from the Angat River and then supply water to water districts in Bulacan. The municipality of Tiwi, Albay, has also awarded a water-supply contract. The Zamboanga, Davao, Tagum and Iloilo water districts have entered into similar arrangements.

(2) Irrigation is the artificial provision of water to agricultural land to assist in the growing of crops. The National Irrigation Authority can undertake this kind of  PPP.

(3) Hydropower provides for renewable energy where power is generated from water. The Quezon province and the municipality of San Luis, Aurora, have partnered with the private sector for hydropower and mini-hydropower, respectively.

(4) Water distribution is the most common water PPP project. Under such system, water is distributed to end-users, such as households, buildings, factories and companies. In Metro Manila, MWSS, in 1997, awarded two concessions, one with Manila Water for the East Zone and the other one to Maynilad for the West Zone. Outside Metro Manila, facilities of water districts are rehabilitated and more efficient operations and management systems are installed by the private sector. The Lingayen, Lemery, San Carlos, Tarlac, Daraga, San Pedro and Camiling water districts have ventured into this PPP. More such projects are in the offing.

(5) Management and service contracts under the Government Procurement Reform Act with the private sector can be entered into for non-revenue water (NRW) reduction. NRW refers to water produced and supplied, but is “lost,” before it reaches the customers.

(6) Septage management can include desludging of septic tanks, septage treatment, and proper disposal or reuse of treated effluent and residual biosolids. Typically, these are procurement contracts entered into by water districts with contractors and providers, where public funds are used. Under a PPP, private funds, resources and expertise can be tapped.

(7) Provision for sewerage is the infrastructure that conveys sewage or wastewater or excrement. Sewerage is an integral component of the MWSS concession.

The government shall choose from this menu. These projects can be undertaken singly or separately, or jointly like in a “bundled” or multi-use project.

Hop on the LGU P4 DILG bandwagon WHAT is this P4 Program for local govern-ment units(LGUs)?…

‘Nightmares’ after award of PPP contracts

Questions fro Dentons Law Firm, Beijing on PPP in the Philippines This columnist had the…