Emergency Powers and PPPs. Do they mix? 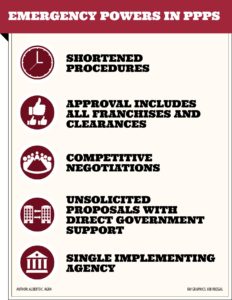 The framers of the Constitution foresaw, which I believe is true to this very day, that government cannot address the woes of the country and move toward better quality of life without the private sector. We are all stakeholders.

In 2014 a final report titled Roadmap for Transport Infrastructure has already been submitted to the National Economic and Development Authority (Neda). Numerous studies have been prepared. It is now time for action.  Selection procedures under the Government Procurement Reform Act, Build-Operate-and-Transfer Law and Joint Venture Neda Guidelines must be shortened.

Unsolicited proposals must be allowed for priority projects, even if there is a direct government guarantee, subsidy or equity. For some projects, prefeasibility studies
may be sufficient.

An alternative procedure may be introduced for PPPs—competitive negotiations. The implementing agency may, after publication, conduct simultaneous negotiations with eligible and qualified proponents and awards the project to the proponent that offers the best combination of quality and price. A second round of negotiations may be conducted to elicit better terms.

Approvals must be streamlined and redundancies eliminated. Consent of the Neda-Investment Coordination Committee should be enough, regardless of the amount, even for purposes of granting any franchise and environmental compliance certificates. Another suggestion is that one agency, maybe the Department of Transportation, could be designated as the sole implementing agency.

Dissecting PPP contracts #6: Amendments The “amendments” provision is one of the shortest, yet important…