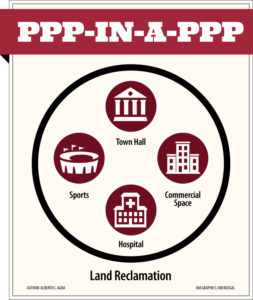 CAN a public-private partnership (PPP) project accommodate another PPP arrangement? What are the types of projects that allow this PPP-in-a-PPP approach? If this was the case, must the second PPP project go through another round of competitive process? Must the two PPP projects be pursued under the same modality? Can a completed government project permit a PPP project in the future?

If a PPP is viewed as a change and development strategy, which it should be, PPP-in-a-PPP and the “hybrid” approaches should be encouraged, planned and even anticipated. Such an orientation promotes innovation and project enhancement.

When viewed as project-based, a PPP deals with a project with predetermined targets, deliverables and obligations. If a project only involves water supply, then water distribution is excluded. If a PPP contract only talks about the construction and maintenance of a road project, then the private sector proponent (PSP) cannot lay claim, by virtue of that contract, to land development along the road.

However, the participation of PSPs is not altogether sealed insofar as those “closed” projects are concerned. What is not found in the scope of these projects could be the subject of another PPP project. Another PPP project means that there could be a different PSP or set of end-users, another competitive selection process, distinct approval processes, winning parameters and requirements for the subsequent PPP. Depending on the modality, another governing law may apply.

For instance, the last awarded project of the previous administration, the Bulacan Bulk Water Supply, pursued under a build-operate-and-transfer modality, can pave the way for other PPP projects. The Bulacan water districts, the end-users of the said project, can enter into distribution joint ventures (JVs) with other PSPs. Septage and sewerage PPPs can be pursued by Bulacan local government units (LGUs).

For the reclamation or horizontal land development JV projects of Parañaque, Pasay, Manila, Davao and Cordova, these LGUs are not precluded from entering into PPPs with the same or other PSPs for vertical development, government centers, hospitals, classrooms and sports facilities over their share of the reclaimed land.

PPP schemes could even take place after a government infrastructure project is completed through administration or procurement. This is the hybrid approach being explored by the secretary of finance. For example, a government hospital constructed using public funds, can be the object of a PPP for operations and management, improved services, joint management, even divestment. Existing government’s Metro Rail Transits may later on tap private-sector resources
and expertise.

Whatever the approach is and whatever the extent of the participation of the government is, the ultimate purpose remains the same. All government projects, PPPs included, must redound to the benefit of the people, the “true north” of PPPs. Better quality of life is what we all aspire for.

To know more about PPPs, the PPP-in-a-PPP and hybrid methodologies, the 50 suggested ways to “future-proof” PPP deals, the columnist invites the readers to a one-day seminar on PPPs organized by the Center for Global Best Practices at the Makati Diamond Residences this Friday, August 12. For details, kindly visit www.cgbp.org.

PPP Conversations #6 with Rep. Arlene Arcillas TO date, some 80 provinces, cities and municipalities…