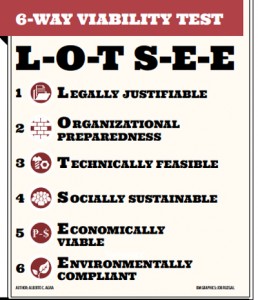 WHY the shift from a cautionary stance to an aggressive position? How come there were only 12 public-private partnership (PPP) projects awarded in the past five years, and why the hurry to grant five to seven more in the last few months? What are the drawbacks and threats of rushing the selection of the private- sector proponent (PSP) without addressing all antecedent  issues? Why do we have delayed or failed biddings?

The latest “black eye” to the “rush PPP job” is the failed bidding of the Laguna Lakeshore Expressway-Dike Project (LLEDP), an ambitious bundled project with three components, that of reclamation, expressway and dike. This is just one of many delayed projects in the pre-June 30 pipeline of PPP projects. The LLEDP, regional airports, North-South Rail, Davao Sasa Port, LRT 2 maintenance and Department of Justice prison projects were also delayed or are facing setbacks.

Going back to the LLEDP, since last year, critical viability issues were already raised by the pre-qualified PSPs. The LLEDP failed bidding should be evaluated and measured against the six-way test of viable PPP projects. The bar of a successful PPP has six rungs. A PPP project must be legally justifiable, technically feasible, environmentally compliant, socially sustainable, economically viable, and the parties must be organizationally prepared.

(1) Legally unjustifiable.According to the Alloy Pavi Hanshin Consortium, there are critical issues which could render the project and selection process illegal and unenforceable. The consortium points out there is no presidential proclamation declaring the land subject of the reclamation alienable and disposable. It also insinuates that the Philippine Reclamation Authority and affected host local governments, contrary to their respective charters, have been relegated to being bystanders in the reclamation project.

(2) Technically unfeasible. Team Trident underscored the complexity of the 3-in-1 project, which renders the technical aspects and solutions of the project challenging, at the least.

(3) Economically unviable. San Miguel Holdings, one of the three prequalified bidders, also lamented that the project may not be feasible, where the costs far outweigh the benefits. Team Trident underlined the imbalance between the risks and rewards.

(4) Socially unsustainable. Under the 1991 Local Government Code, the affected sectors must be consulted prior to the implementation of a national project, which may cause harm to the environment. No such process was undertaken. Cause-oriented groups decry the absence of real benefits of the project to the poor and the potential displacement
of families.

Apparently, the six pre-conditions fell into deaf ears or the PPP gurus of the Administration assumed the issues were innocuous. As it turned out, these were non-starters and deal-breakers.

An unsolicited proposal is (in)complete when…

Desocializing Losses and Defining the Role of Government in PPPs